Summer down under is in full swing. Australia has had a record-breaking heat wave (cracking the 50s Celsius) and New Zealand temperatures have been hitting the 30s on a regular basis. Great if you’re at the beach; not so good if you’re on a two hour run or trying to hit a PB.

So what effect does the heat play in running performances? And what can we do to combat those effects? 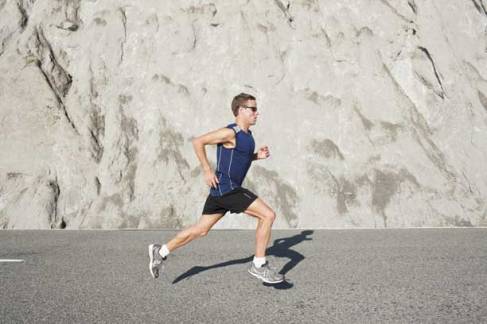 NZ “Sauna” 10k Champs
As a case in point for answering these questions, the New Zealand 10,000m Champs were held just over a week ago in Timaru. As luck would have it, Timaru that day recorded the national high. And even with a start time of 5:40pm, reports from the track were saying the mercury was hovering around the 34c mark. Ouch!

So these were the results:

If you ignore the names, the times look more like the results for a regional cross-country race rather than a national-level track 10k. Then you dig into the names and it’s clear that everyone was running about 2-3mins slower (or more) than their best. And with World Cross Country positions up for grabs for sub-30 performances, it wasn’t going to be run tactically either with a sit-and-kick mentality—guys were out there to run fast.

So, ultimately, it’s safe to say that across the board the nastiness of the heat was the biggest factor for the relatively slow times (not saying that 31:30 is slow, but you know what I mean).

One Runner’s Experience
One of the favourites going into the race was Wellingtonian Tim Hodge (PB = 29:45). Here are his thoughts from the “sauna” race.

What sort of shape did you feel you were in on race day? I ran 30:00 at the Chiba Ekiden (10km road race, 11C, no wind, last 3.5km hilly) so felt I could have gone 29:30 if everything went perfectly. I had had a bit of a niggle in my plantar fascia during the week, which affected my build up a bit as I missed a key workout but didn’t feel it during the race.

Do you prefer running in the summer or winter? I am definitely more of a winter/colder runner. This weekend was actually the first time I’ve finished a major race in that sort of heat. Ran at the NCAA Regionals three times whilst in the States (5k, 5k, 10k) and didn’t finish any of those races—all of which were above 30 but much more humid than Timaru. I guess because I am a bigger runner (68kg) I feel the heat a bit more than others.

We hear it was around 32-34c, but how hot did it actually feel at race time? It felt hot! Only jogged 10min and did some stretching strides and was ready.

Did you take any precautions specifically for the heat? Yeah I made sure I was hydrated before the race, though probably should of taken more. Only had water though. Should’ve had some watered-down Powerade. I also didn’t drink anything during the race but every 5 laps I would tip a cup over the back of my head/neck to try cool down a bit.

Did you reassess your goal time before the race? Going in I was aiming for a World XC time 29:15 but obviously I had to reassess that. There really was no way I would get near that time so we just settled for going for the win.

Tell us about the race itself. Race went out slow in 78-80sec per lap. I was tucked in. Then at about 2k found myself leading and kept leading till about 9km. I didn’t really want to be leading but just kinda found myself in that position. I was toast at the end and couldn’t have gone much faster so I guess I am happy. (They did stuff up the lap counters though which made it really tough especially towards the end when you are too delirious to think straight.)

Lessons learnt? Definitely drink more before the race and maybe try to take in some fluid during. Also I would do as little work as possible i.e. not lead for 7km and tuck in!

So Tim was around 2mins outside of his potential on the day, which isn’t too bad for a self-confessed ‘winter’ runner, especially when you look at some of the other runner’s times. http://www.runworks.com/calculator.html provides a handy calculator for estimating equivalent times at different temperatures, according to which, Tim’s performance was worth about 30-flat at 16c.

But the question remains, why do we run slower in the heat?

The Science
“As soon as the body heats up, blood is diverted to the skin, where cooling takes place. … In effect, to prevent overheating, the body reduces the amount of blood available to enhance performance.” (Jack Daniels, Daniels’ Running Formula, p.105)

Essentially it’s like trying to drive a car as fast as you can while at the same time using it’s engine to power a large fridge. The hotter the conditions, the more power will be sucked from the engine into cooling the fridge rather than driving the vehicle. The hotter the weather, the slower the car.

To test this, I did a little experiment of my own. Armed with a watch, a heart rate monitor and a nearby 400m track, on two occasions—one at 7am and then again at 1pm (the same day)—I jogged down to the track and completed 400m at my current estimated 5k pace (about 74sec per lap). By running at equivalent paces in different temperatures I wanted to see if there was any difference in heart rate, and hence the effort it takes to run at that temperature.

Here are the results for the actual 400m reps:

I put the difference in pace down to feeling a little fresher and more limbered up in the 1pm session. So that messes up the comparison a little. However, here are the two interesting conclusions that I drew from my little experiment:

My guess is that the effects of warmer temperatures come into play the longer you’re out there (as your body temperature heats up), hence why my recover heart rates were so different. It would be great to try this experiment again with, say, a mile rep or tempo on a treadmill in a heat controlled room.

Combating the Heat
As far as training goes, you can always run early in the morning (however, humidity can often be high then) or late at night. You can run on a treadmill with a fan and AC cranking. You can also seek out shady trails.

However, racing is another story. You can’t change the course or the time of day but you can alter your approach and your expectations.