Rigor mortis set in one minute after crossing the finish line but I had a huge smile on my face—it was mission accomplished. Job done. 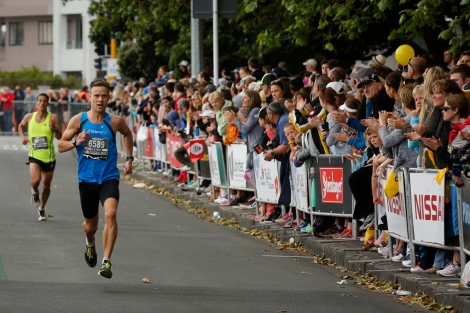 The crowd along the final straight was awesome!

To avoid boring you with endless boasting, I want to emphasise that my enjoyment of the day came down to two factors: hydration and pacing.

And before I talk about them, a little background to bring context …

My previous marathon PB was 2:41 it was set in Chicago two years ago on a hot day where I blew up from a combo of dehydration and poor pace judgement. To prepare for Chicago I was running between 100 and 160 km per week. So pretty solid.

I got rid of the stitch that day in the ambulance on the way to A&E, not long after crossing the finish line. I was dehydrated and my performance suffered as a result.

A similar thing happened in Dunedin just two months ago, but this time instead of the stitch it was just my assumption about the weather that was the problem.

The race had started in very cool conditions (I even wore a long sleeve thermal for the first 10k) so I didn’t think I needed to take on huge quantities of water. But by 30k the day had heated up into the high teens and I turned the corner, with 12k to go in one direction, to have the sun in my face and what breeze there was at my back. When you are already half dehydrated from exercising this sudden jump in heat is not going to help.

In both races I went from cruising along well to suddenly gone within just a mile. And the effect of this showed in my big positive splits (meaning I slowed up hugely in the last half).

Which brings me to Sunday 3 November, the Auckland Marathon. 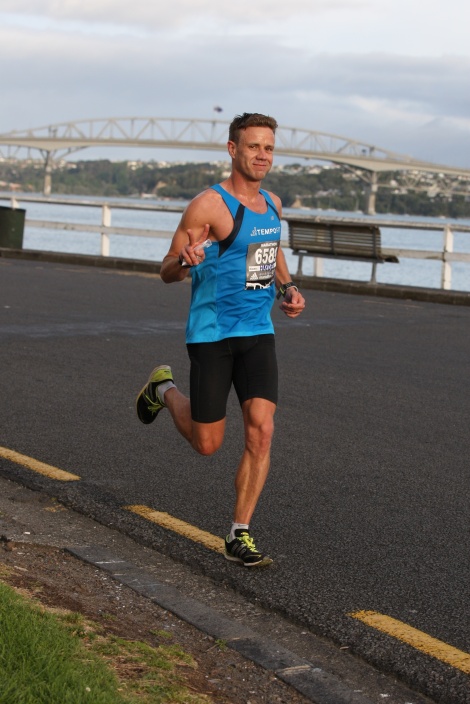 At about 20k I was feeling comfortable knowing I had got the first half of the race pretty much perfect.

In preparation for this race, due to some niggling injuries and on-going health concerns, I was only running between 50 and 90km per week—very light compared to my Chicago build up. But Dunedin had taught me that 2:40 pace was still realistic so long as I nailed those two key factors of pacing and hydration. In both Chicago and Dunedin those factors could be described as erratic and overly optimistic (in reference to pacing) and only just keeping up appearances (in relation to hydration).

I knew that with the lack of mileage in training, I couldn’t afford to run any kilometres under 3:40. This would accumulate too much fatigue and cost me later on. I had to nail the pace from the start. Even run slower at the start being sure not to burn my matches too early.

The race kicked off in the usual rush and at one kilometre (in about 3:50, so three seconds slower than my target 3:47) I looked around and couldn’t believe how many people were surrounding me. They were falling into the same trap that got me in Chicago. Over the next 5k I would see many people reel in their speed in a sudden realisation that there was no way they could maintain that pace for the full 42.2.

I settled in to a rhythm with two other guys who I figured would run similar times. But as we climbed over the rolling hills of the North Shore, the pace picked up (helped along by Wellington’s Stephen Day who is almost faster on the hills than he is on the flat!). Sensing we were now running sub-3:40s I pulled back and even slowed up to about 3:55s to give myself a rest from that flurry of a few kilometres.

But this meant I was now running alone, which I would stay, except for the odd runner who fell apart, until 3k to go. But it also meant that I could focus solely on hitting my splits and on my hydration.

A week before the marathon I had done a workout at the same time in the morning as the race itself and calculated my sweat rate. In cool conditions I was losing about a litre of fluid an hour. Meaning that if the race got warm (which it was forecast to do) I could lose over 3 litres (or more than 4% of my body weight). Research tells us that even in cool conditions a 2% reduction in body weight from fluid loss reduces 5 and 10k performances by 5% and is even more pronounced as the distances get longer, such as in the marathon. 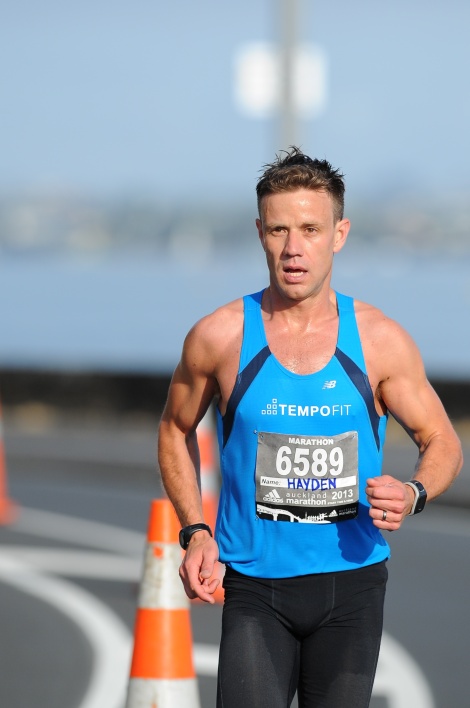 The stretch from Vic Park to St Heliers was hot with the sun reflecting off the tarmac. This is when I was glad for every drop of water I had consumed early.

So I had to keep my fluids up but also be careful not to overhydrate (yes I’ve been to ED in an ambulance from this before as well). My rough goal was 200ml of isotonic fluid every aid station, which were 4k apart (so about 800ml per hour). This wouldn’t be total fluid replacement but enough to avoid going beyond that 2% body weight zone and not too much to give me the stitch.

I had made up 300ml bottles of electrolyte and had them delivered to each aid station. These proved perfect as I was able to hold them in my hand and sip away whenever I felt comfortable (running downhill seemed harder to swallow than uphill). I also had a good supply of carbs (in the form of lollies and gels), which I ate early, as opposed to previous races where I would only touch these in the final half.

My splits went as follows (target splits in brackets):

As you can see, I kept pretty close to my target times with the exception of going slightly too fast in the first 5k, surging again around 18k (I think rolling off the bridge did this), and slowing up slightly between 30 and 40k. 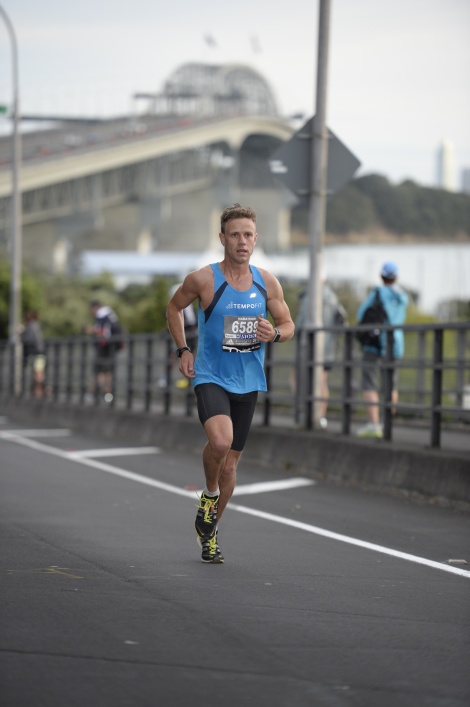 What was most pleasing to me was that with 4k to go I still had some fight in me. This time I wasn’t thinking about who was coming from behind and aiming to defend my position. I was measuring the gap to the guys in front and began slowly reeling them in.

At 3k from home, I picked up a straggler who liked he was having a rough day. With 1k to go I got another straggler. Then I started to realise that the guy, who I had measured at the St Heliers turnaround (about 31k) was 90 seconds in front of me and didn’t seem to be slowing, was now within striking distance.

As I wound through the streets of the Viaduct Basin, spectators were urging me on to catch him. I felt I had very little left, but the carrot was enough to spur me on to gradually increase my pace. With 400m to go I broke into what felt like a sprint. I pulled up alongside him. He began sprinting too.

I thought, “Jeepers! There is no way I can keep this up for another 300m!” We rounded the corner into Fanshawe Street and luckily he eased up and I carried on sprinting, being pushed along by the massive crowds.

I took a glance at the race clock and saw it just click over to 2:39. I had plenty of time to get under 2:40—which was a massive relief after the distance markers had been feeding me inconsistent splits throughout the race. So knowing that I had achieved my goal I did a double fist pump to the crowd, crossed the line, slowed down to a jog, then a walk, and then seized up. Literally, seized up. 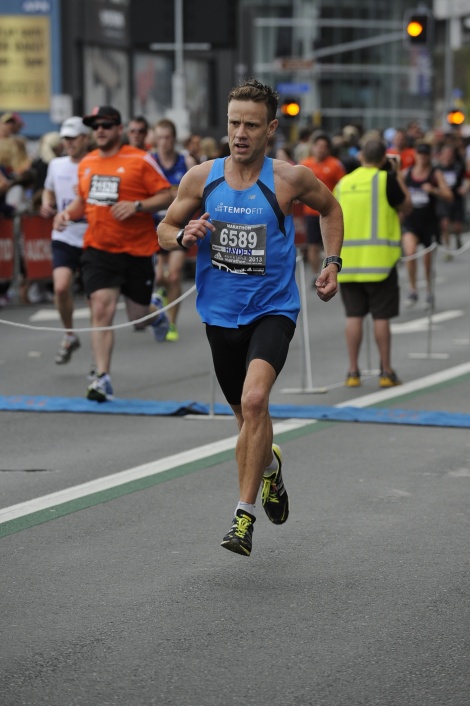 Don’t you hate it how there are always multiple timing maps at the finish line so you don’t actually know where to stop. This is when I realised I still had another 10m to run!

Calves, hamstrings, and hips (hips! I’ve never ever, ever felt even the slightest niggle in my hips before but this time they just totally locked up). I waddled my way to the water stand, waddled on to to the electrolyte stand, waddled my way to eat banana, tried to stretch out my hip, and then waddled off to find my gear which happened to be on the far side of Vic Park—400m has never felt so long! 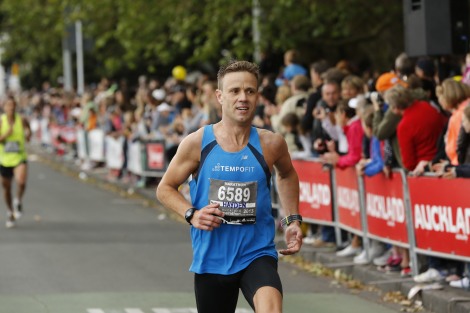 It was a beautiful day for running and the course, though undulating in places, is simply stunning. I was over the moon to finish strong and knock off a good PB from about half the training of my previous PB.

Anyway, enough of my race story … at the pointy end of the race. Sam Wreford dominated a strong field with a commanding win in 2:18:57. And from what I saw after the St Heliers turnaround, there was a great 4-way battle going on amongst the ladies, with Aussie Kirstin Molloy winning in 2:52:24. Plus we had a whole heap of TempoFit-ers racing and dropping some huge PBs and putting out gutsy performances all round. Well done to everyone who raced!

And thanks for reading this novel-length post. I promise future posts will be culled back!

PS. The Auckland Marathon this year introduced a cool feature that could post your splits and overall race time automatically to your Facebook profile. Unfortunately there might have been a few early glitches with the system. Or do you think the IAAF might accept this as proof of a new world record? 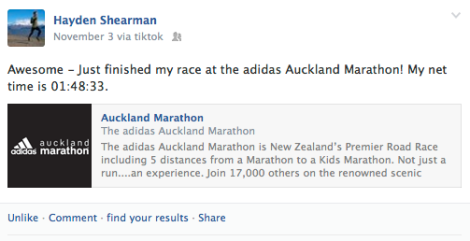 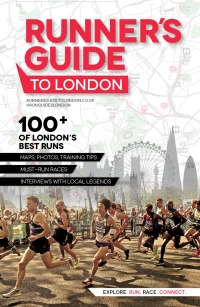